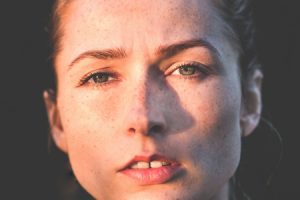 Fun fact: your brain likes one of your eyes more than the other.

That is what brings about eye dominance. Visual input from the favorite eye (the dominant eye) is preferred. The other eye still works equally well—in case you are getting worried. The only difference is that your dominant eye takes the lead.

How to Determine Your Dominant Eye

Does it matter which of your eyes is dominant? Well, most people can afford to go through life without bothering about eye dominance. However, others such as archers and photographers cannot.

There are several tests that you can use to know whether you are right- or left-eyed.

a. The Mile’s Test

Stand upright and hold out both hands in front of you. Your palms should be facing away from you. Put the palms together, such that there is a small triangle-shaped opening between them. Focus on an object (a doorknob will do) that is roughly 10 ft away through the opening. Observe it for three seconds.

While still looking at the object through the hole, close one eye. Check what happens. Open it and close the other one. Observe what happens.

b. The Pointing Test

Here is another interesting test.

Without moving your hand, close one eye. Observe what happens. If your finger still appears to be pointing at the object, the open eye is your dominant one. Close this eye and open the other one then observe again. If your finger “moves”, this is your non-dominant eye.

Get a rectangular piece of paper or card. Make a circular hole in the middle.  It does not have to be a very big hole (think 1.5 inches in diameter).

With your arms stretched out in front of you, hold the card. It is important that you keep your hands parallel to the ground. Find a small object and stand about 10 feet from it.

The three tests discussed above help you tell your dominant eye over a long distance. This convergence test is different because it helps you figure out which eye is dominant over a short distance. For most people, the result will be the same.

Write a letter/number on a small piece of paper and tape the paper on a ruler. Alternatively, just use a pen.

Hold the ruler/pen with both hands and stretch them out in front of you (nose bridge level). Bring the ruler/pen slowly towards your nose. As the object comes closer, you will notice that one eye stops focusing on it (stops converging). This eye is the non-dominant eye.

For some people, both eyes may remain focused. If that is your case, you are still normal. In fact, 17% of the population has no dominant eye.

As you can see from these statistics, there is some sort of link between the dominant hand and the dominant eye.

The exact relation between eyedness and handedness has not yet been established. Some experts maintain that most of these eye dominance tests are influenced (or contaminated) by handedness.

What Does Science Say?

The Ortonian view (from page 6) of this subject suggests that handedness is highly related to eyedness. In fact, according to this stance, there would be less cases of cross-dominance if children were not forced to use their right hand when little. It is no secret that kids are “encouraged” to use their right hand in many cultures. In situations like these, no attention is given to eyedness. So while a child is trained to use the right hand, no one helps them alter their sighting eye, hence cases of cross-dominance.

Following the above findings, some scholars asserted that eyedness is the more accurate measure of the body’s laterality.

It is important to note that although there is strong evidence for the above data, research is still inconclusive. People have always focused more on handedness and less on other parts like eyes. You can, however, expect more information in the future.

It has been mentioned above that eye dominance does not really matter for some people. Nonetheless, there are activities that require the use of one eye only for a clear field of view and, consequently, desired results.

You already know that people look through the camera’s viewfinder using one eye. From the tests above, you can see how the non-dominant eye may not be the best for collecting accurate information. Using your dominant eye ensures that no details are displaced.

When a shooter is both left handed and left eyed or right handed and right eyed, they may not have much of a problem. Issues arise when they are cross-dominant, that is, the dominant hand and dominant eye are on opposite sides.

Understanding this fact helps you know how to aim while incorporating the necessary adjustments.

This is probably where eye dominance matters most.  Archers buy their bows depending on which hand is dominant. Many modern bows come with either a left-handed or right-handed riser.

Given the mechanics of shooting a bow, you can see how hard it is to shoot as a cross dominant archer. However, this is not a unique problem and there are a number of solutions.

The second solution, and the one that most seasoned archers recommend, is to shoot according to your dominant eye. So if you are left-eyed but right-handed, you should get a left-handed bow and vice versa. For younger shooters, this will not be difficult. It is easier for them to learn to shoot with their non-dominant hand. It may take longer (a week or so) for older archers but it is possible.

The issue of eye dominance is not widely discussed. But it is a big deal in the archery community. The first step is to figure out your dominant eye. If it matches your dominant hand, then you are in luck. If it does not, relax. Cross dominance is not uncommon among archers. The point is to establish what solution is ideal for you.  Do you keep both eyes open? Do you train your non-dominant hand or non-dominant eye? The answer lies with you.